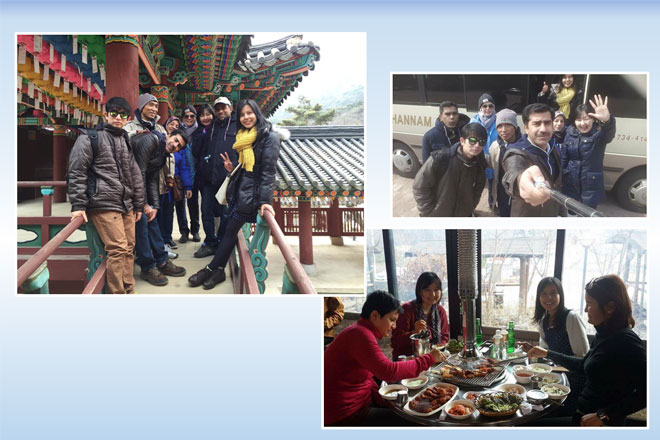 The international students in KGSF had opportunities to explore different aspects of Chuncheon in March and April. Chuncheon is a city located in the northeastern province of Korea and surrounded by a river and hills. The city offers various enjoyable outdoor activities, beautiful natural scenes as well as historical and cultural attractions.

The first group of international students headed to Chuncheon on March 12. After about 1h 30min on the bus, the group arrived at Soyang Dam, the largest in Asia and the fourth largest rock-fill dam in the world. This huge dam serves multiple purposes including flood control, hydroelectric power generation, irrigation and fishing and can hold 29 million ㎥ of water – Korea’s largest man-made lake. The group went site seeing around the dam by taking a ferry to Cheongpyeong Temple which was the next place to stop. The paths leading to the temple are famous for the Guseong Waterfall, the Gonghu Pagoda as well as some of the most scenic areas in Korea. The temple is an ancient temple that holds several artifacts that are designated as national treasures. Its designs and colors show a rare mix of the ancient and new. One of the most famous treasures found there is the temple’s “Revolving Door” which is used as a symbol for the spirits heading to their afterlife.

After visiting the temple, the group went to Gangchon Rail Park, one of the three rail parks in Chuncheon. The rail park is built on a closed railroad station where trains on the Gyeongchun Line have not been in operation for 70 years. The group pedaled on cars on the railroad tracks, viewing the lovely Bukhan River scenery before heading back to Seoul.

Then on April 9, another group of international students went to Chuncheon for a day out. The program started out with exploring Nami-Island which has become a popular cultural spot for foreign tourists after the airing of Korean drama ‘Winter Sonata’ in 2002. This tiny half-moon shaped island has been reforested and much investment has been made in the environment, art and culture-related events since the 1960s. Consequently, Nami-Island now offers harmony between humanity and nature. On the island, the group also had an opportunity to visit Nami Eco School where they had a chance to make their own echo bags and solar toy cars as a part of the sustainable development education program. Finally, the day ended with a visit to the rail park in Gapyeong where the group biked along a trail next to the Gapyeongcheon Stream Iron Bridge - Bukhanggang Iron Bridge - Zelkova Tree Tunnel.