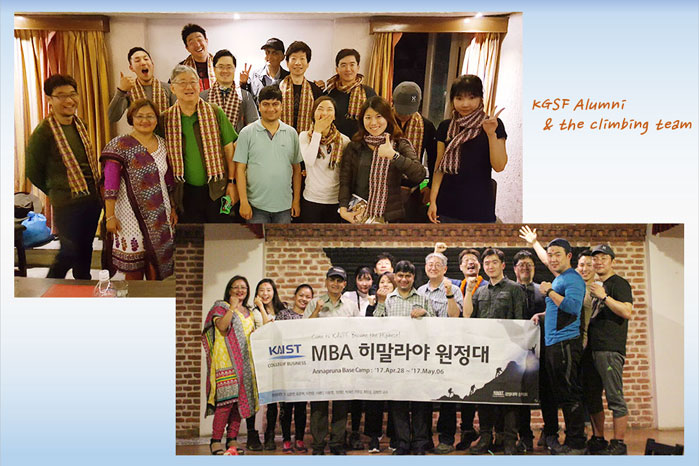 We are pleased to announce that the KGSF Alumni Association has been established in Nepal as of April 2017.

On April 28, Professor Byung Chun Kim who visited Nepal for a trekking mission met KGSF alumni members residing in Kathmandu. This is the fifth regional group for KGSF and Lila Raj Kafle (FMBA 2013) was elected as the representative of the group. As a representative, he will be managing their regular meetings, and he will be in charge of communication between the alumni and the university. In addition, Professor Byung Chun Kim and group of KAIST students took part in meaningful and worthwhile cause during their stay in Nepal. The following is the full story of Nepal:

Professor Byung Chun Kim and nine students from Professional MBA went on a trekking mission to Annapurna Mountain in the Himalayas in north-central Nepal for nine days in April. Min Sung Choi (PMBA 2015), the organizer of the trip, first introduced the idea a year ago and many others have joined to live the dream of climbing the Himalayas. Consequently, the climbing team succeeded in trekking up to Annapurna Base Camp, with the height of 4,130 meters, challenging and overcoming difficulties with a strong mindset and great teamwork.

While visiting Nepal, the climbing team also took the opportunity to meet the KGSF alumni in Kathmandu. The alumni members set the meeting showing them great hospitality. The gatherings took place on April 28th and May 5th, and they had an enjoyable time sharing news about their work, families, catching up with Professor Kim as well as networking with the rest of the group over Thali (Nepali traditional dish) and folk songs. Lila Raj Kafle, the alumni representative of Nepal, remarked, “We are very happy to get the opportunity to welcome the KAIST team in Kathmandu. We felt like we were at KAIST with the Korean team in Nepal. We enjoyed a delicious Nepali dinner and Nepali dance as well. In addition, we exchanged our experiences. We expect to welcome the KAIST team to the Himalaya’s country Nepal in the future as well.”

The climbing team finished off their trip by volunteering in the village of Mahadev Besi, a district 40 km away from Kathmandu, and one of the areas where earthquake caused a great deal of damage in 2015. They had selected Mahadev Besi as their place to volunteer because it was one of the places that did not receive enough relief during the devastation and much help was still needed for the villages to recover. Before their departure, the climbing team had raised funding amounting to about USD 12,000.00 to build a library (KCB LIBRARY) in the village and to donate over 6,600 books for local students. Numerous members of KAIST College of Business took part in the donation, and, in addition a few companies made contributions by providing supplies and other gifts.

Mr. Choi commented about the project, “Even though there were difficulties throughout the process, we have learned and experienced more than we could had ever imagined. Also, we got a lot of unexpected support from the KCB family, which gave us more motivation and encouragement to accomplish the goal we had set for the trip. Especially, we had received widespread support from the KGSF alumni in Kathmandu. They communicated directly with our local guide to review the trekking and volunteer plan and also advised us on transportation of donations. It was great help for us.”

Up to this point, KGSF has established its alumni associations in Uzbekistan, Vietnam, Uganda, Kenya Nepal and plans to host another alumni gathering later in the year. We will be in touch with full details about the next visit soon! We look forward to visiting your countries in the near future and let us know if you are interested in becoming an alumni representative of your country/region.