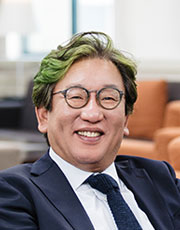 SangHyup, Kim Invited Professor
Contact Information
Research Areas Green Growth Strategy, Climate Change and International Collaboration
Overview Biography
Overview
Sang-Hyup Kim is a visiting professor at Graduate School of Green Growth, College of Business, KAIST and chairman of Coalition for Our Common Future. Prior to joining KAIST, he worked at the Office of the President of the Republic of Korea in 2008 as the Secretary for National Future and Vision, where he contributed in setting the historic "Low Carbon Green Growth" vision for Korea. In 2011, he became the Senior Secretary to the President for Green Growth, coordinating the planning, development and implementation of Korea’s Green Growth strategy. Through collaboration with the Presidential Committee on Green Growth and relevant ministries, his agenda ranges from national implementation of Green Growth policies to international climate change negotiations and promoting global cooperation for making Green Growth a global asset. He also served as a member of the Global Agenda Council;