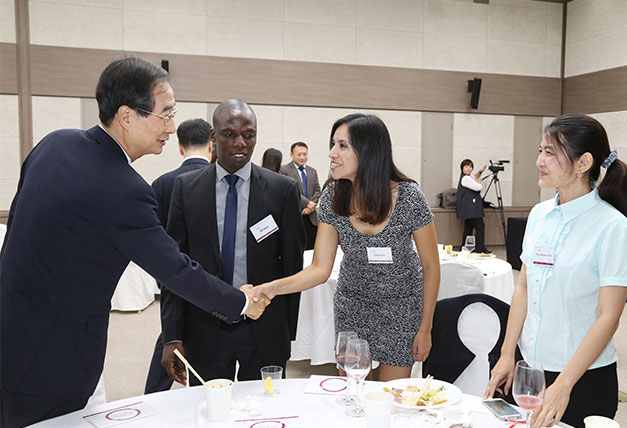 KGSF celebrated the 10th anniversary of its foundation, on October 4, 2016. To look back on the history of KGSF and share its future mission, KGSF hosted the 10th anniversary ceremony. The ceremony was held with some guests who have contributed to the establishment and development of our faculty, alumni and students to commemorate the school’s milestone.

At the beginning of the ceremony, Former Prime Minister Duck-soo Han said in the speech, “The development of financial institutions is essential for Korea to achieve global economic growth. In that sense, the role of KGSF, which has trained professionals in financial industry, is very important,” In addition, the Chairman of the Financial Services Commission, Jong-yong Yim, said, “At this point, it is difficult to procure skilled personnel, and KGSF should play a leading role in reducing the gap between the global financial market and Korea’s financial industry. I hope that you will not forget those responsibilities, and we look forward to the development of KGSF as an institution that fosters the financial industry.” Both invited speakers emphasized the role of our school as an educational institution which supplies personnel with professional abilities in finance.

In 1996, KAIST launched the nation’s first MBA which is specialized in Finance Engineering. Next, KAIST Graduate School of Finance was established in 2006 in partnership with the Korean Government’s Ministry of Finance and Economy, in accordance with the national policy direction. As a frontier of financial education, the institute has been responsible for this purpose and at the same time, it has focused on quality for the last 10 years in terms of training financial specialists,   innovating its financial education model, and developing practical education.

○ Briefing on KGSF performance
- In terms of training financial specialists, the number of students has increased from an average of 37.3 to 99.5. Over the last 5 years, the employment rate of our graduates is 95.3%, the highest among domestic MBAs. In addition, 1,164 graduates are actively working in various fields and forming the largest financial alumni network in Korea.

- In terms of innovation of the financial education model, KGSF has revolutionized the diversification and subdivision of the curriculum as to reflect advances in the financial industry. Since 2006, KGSF has introduced a module/track program in a semi-semester format to offer various specialized/advanced subjects to focus on individual interests. Recently, KGSF has launched the Financial Analytics Program to match the trend of financial-IT convergence.

- To provide practical education, KGSF has offered the largest financial database in Korea to students (including the Reuters Trading Center and the Koscom Financial Information Center) and it has organized a fund with an endowment of one billion won to give students opportunities to practice investment. In addition, to meet the national demand, KGSF has provided Green Finance Program and the KOICA-KAIST Program in Finance for developing countries.

The Dean of KGSF, Professor Jangkoo Kang, suggested the future of KGSF is to be an “Innovative and Globalized School.” He said, “The financial market basically works in a global environment, therefore the globalization of the Korean finance industry is a critical fundamental challenge to strengthen its competitiveness. KGSF will continue to endeavor sincerely not only for the globalization of education but also overseas expansion.”

Not completely satisfied with the achievements for the past 10 years, KGSF wants to take further steps to support a virtuous cycle between the financial industry and education.