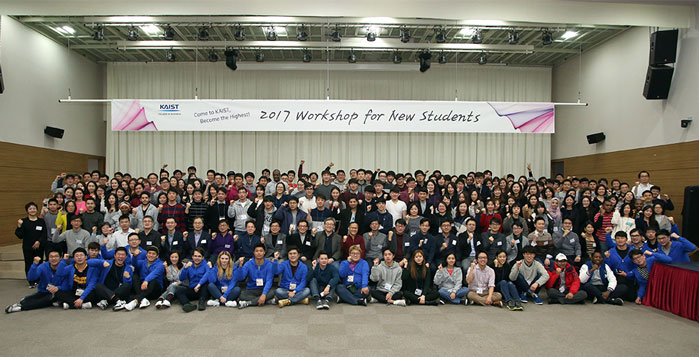 Come to KAIST. Become the Highest!

A short, but straightforward phrase that represents the future of the new students, that became part of the different academic programs offered at KAIST College of Business this February 2017. With the arrival at a Training Center near Seoul, students from Finance MBA, Techno MBA and other departments, received an emotive welcome by KAIST members and were formally incorporated for the spring semester 2017. The event was carefully planned and prepared with the main objective of achieving the feeling of belonging, pride, and challenge for becoming part of one of the most renowned institutions in Korea. With the oath by the students towards KAIST principles and emotional speeches by recognized professors, the event was unforgettable.

After allocating the accommodations for all the new students of KCB, including KOICA and international students, the participants in this event were separated into teams for the purpose of enjoying a variety of games, where teamwork and group cohesion were essential to surpass all the ingeniously prepared challenges. The team building event finished with the prizes for the winners of different tasks and this was followed by a delightful and recreational dinner.

The teams had to perform that day one last task before the networking social event. Each team had to create a theater piece that had to be performed the next morning. The motivation of course, was to demonstrate how well the members of the group got to know each other in order to show their best skills in the performance. Finally that night, the students were divided by their majors and had the opportunity to meet their new department colleagues and distinguished professors. The social networking event was characterized especially by sharing experiences and anecdotes between professors and students.

The next morning the groups met again to perform a show full of comedy, drama, and creativity. The groups did their best to impress KAIST members and outperform the other groups. At the end, an award was given to the team whose creativity expressed the principles of being a member of the KAIST family.

With this last event, the welcome workshop ended with students fully motivated and proud of becoming part of one of the most important educational institutions in the academic world. The objectives of the event were successfully achieved; especially the establishment of friendly partnerships and networking that will be the pillar of social relationships in KAIST during the students’ academic program.